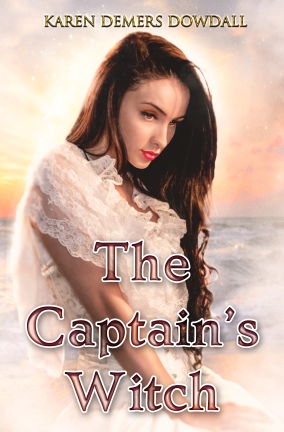 Lost in the Annals of Time: A Story of Love and War

The Captain’s Witch is a hauntingly beautiful story of love that transcends time. Sara Windsor Knightly was born into a family with generations of witches. She inherits Windsor Manor a colonial era manor built in 1680. She had no idea that the Manor is haunted by Jacobite ghosts, and a ghost named Christian Windsor. Christian Windsor is a gentleman farmer who is also a Captain in the British Brigade in the year 1690 in Colonial Connecticut during King William’s war with the French and the Abenaki Native Indians.

To complicate matters, a White Oak Tree on the property of Windsor Manor is haunted by the ghost of Alice Windsor Hall. The White Oak Tree was once a sapling on the grave of Alice Windsor Hall, one of Sara’s distant relatives who was falsely accused of witchcraft in 1690 and burned at the stake. Alice has haunted the White Oak for more than 300 years and she has plans of her own that sets everything in motion.

Alice spins a spell that sends Sara and Christian to the year 1690 to save her little girl, Clara, from the hands of Reverend Baron Warwick, a Puritan Zealot who has diabolical plans for the child. Alice promises to return Sara and Christian back home as soon as Clara is safe from harm. Alice’s promise sends Christian back to war and certain death. A brokenhearted Sara is sent back to the present day to Windsor Manor. Sara is, quite by accident, sent once more back in time to revisit a very different Christian, who has no memory of Sara, putting her in great danger of being accused of witchcraft.

8 thoughts on “The Captain’s Witch – A New Historical Fiction”