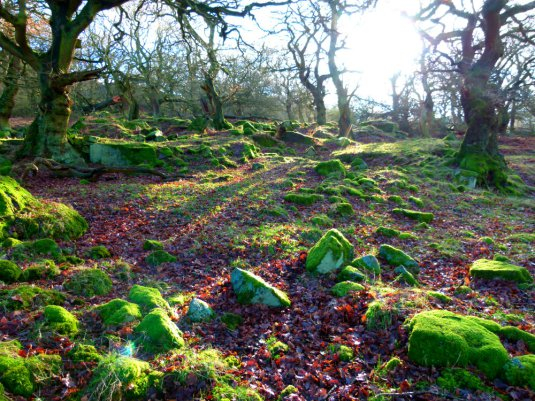 I have often driven by this strangely odd glade with the year round creepy leafless trees. It is as though the trees were caught dancing in the wind mid-movement by some ghastly phenomena or caught up in wicked spell. I even walk by this graveyard-like glade, during my morning walks, but I have never had the courage to walk into it. The entire area gives me goosebumps. Perhaps it is the numerous scary stories told about this place that gives it a spooky reputation. Perhaps there is magic here and maybe the large stones carry that magic or even some small standing stones that make it creepy.

As a matter of fact, I have yet to see a single person walking through the glade, but I do carry a secret that I should not tell a single soul. It happened early one spring morning a few years back, as I was walking by the glade. A day that I will never forget. It was my usual early morning walk. A beautiful day it was too.  I stop for a moment to look at the glade. I sensed and then saw something was different. Something was happening. A miasma was forming right before my eyes, inside the boundaries of the glade. It wasn’t a person, like you or me, no, it was only a formed likeness of a human being.

The stench from it was almost unbearable. At first, I thought it was just a trick of the light playing with my eyes, but it wasn’t. It was real. Almost as real as you and me. I was too scared to even move or run. I stood as immobile as a standing stone in the glade. The newly formed being’s long dark hair floated in the wind, but there was no wind at all. She stood there silently, as though she was looking at something, something I couldn’t see.

Was I observing a different time, a parallel universe? I even tried not to breathe for fear it might hear me or see movement from my chest, but whatever I did or didn’t do, caught it’s attention. At first it looked scared…of me?  It started to back a way, to float as it were, barely above the ground.

Suddenly, she turned toward me and was in front of me in heartbeat, yet she remained just inside the boundaries of the glade. She looked as frightened of me as I was of her. Then she did something so unexpected that I had to smile. She smiled at me and nodded. She didn’t speak, no. But her smile was innocent, sweet, like a little girl. So I continued smiling too.

Then there was a rumbling from the earth inside the boundaries of the glade. She looked scared and in an instant she was back to the place inside the creepy glade were she had formed. She looked up at me sadly, as though she wished she didn’t have to say goodbye so soon. It was as though the earth just swallowed her up and she gone. I still comeback at the same time of day, in early spring. Hoping against hope, that she would appear again.