For a couple of years now, I feel as though I have adopted many children just by sending them cards, letters, and sometimes gifts. I love them. It is the most wonderful thing in the world to do. I hope that anyone interested would consider these beautiful Lokota Indian children by sending them a card, a letter and/or a small donation or gift. Anything at all would make a difference in their lives. They have already lost so much that is breaks my heart and so giving just a little love, joy, and care helps them so much.

Culture is defined as the established beliefs, social norms, customs and traditions of a group of people. The same is true for Native American culture. Factors like geography, history and generations of spirituality, stories and traditions also shape the culture of any given tribe or people. Native Americans are no exception.

Here at St. Joseph’s Indian School, we have had the privilege of working with Native American families and communities since 1927. In 1991, the Akta Lakota Museum & Cultural Center was established on our campus to honor and preserve the historical artifacts and contemporary art that tell the story of the Lakota (Sioux) people of the Northern Plains.

Native American culture is sometimes thought of as a thing of the past. However, contemporary powwows, art and language revitalization efforts make a real difference in their lives as their traditional identity. 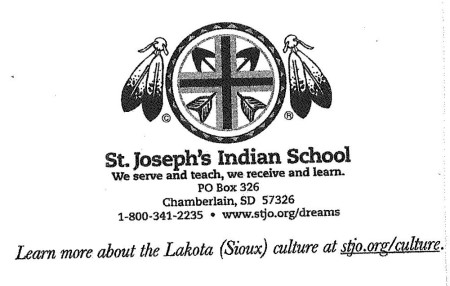