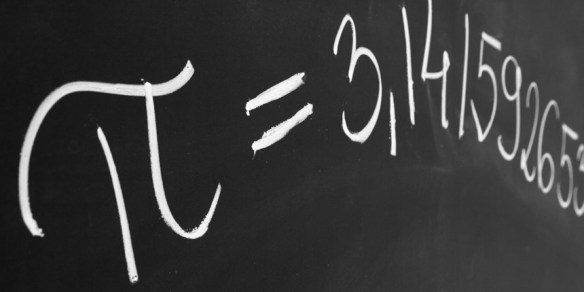 Pi Day spotlights one of math’s most seductive numbers! by Dan Rockmore.

Why do we celebrate the number pi (π) on March 14? Because it’s the fourteenth day of the third month of the year, and 3 and 14 are the first three digits of pi’s decimal expansion. If you really want to show you’re a pi aficionado, you can start your celebration at 1:59 p.m. and 26 seconds, because with those five additional digits you have pi’s first eight digits: 3.1415926.

Those eight numbers are just the beginning of pi’s true value. Unlike most numbers we encounter in everyday life, pi has digits to the right of the decimal point that go on not just for a long time but forever — and in an unpredictable way. The Swiss mathematician Johann Heinrich Lambert proved that in 1761.

The short way to say this is that pi is an irrational number, one that cannot be represented as a fraction and thus has an infinite and never-repeating decimal expansion. And since the 19th Century, pi has been known to be transcendental, meaning that no combination of its powers can add up to a whole number. This distinguishes it again from more familiar irrational numbers like the square root of two (whose second power is equal to two).

You don’t have to be a mathematician or even a “math person” to find pi fascinating. We all learned as students that pi represents the ratio of the circumference of a circle to its diameter, or, as we might put that mathematically, π = c/d. But not every student fully appreciates the fact that the ratio stays constant no matter how big or how small the circle.

Pi is an ideal. It characterizes the relationship between measurements of a perfect circle in a Platonic world. But we see its real-world reflection all around us. It’s present in coins, plates, those circular irrigation ponds you see from airplanes, and other familiar objects — pi is embedded within them all. The same is true for three-dimensional objects like spheres and cylinders. As long as something is round, pi applies.

And pi isn’t just about round things. Famously, it’s a piece of Heisenberg’s uncertainty principle, which quantifies the level of precision one can obtain when making measurements at the subatomic level. Closer to home, pi is part of a formula used to price investment risk. Pi both leaves nothing to chance and helps measures chance.

Pi is as timeless as it is unchanging. Our ancestors knew about pi at least as far back as 4,000 years ago, even if a Greek letter wasn’t used to denote it until 1647. The Bible contains an implicit reference to pi: A cylindrical vat used by Hiram in the “Book of Kings” is said to measure 10 cubits across and 30 cubits around. (30/10 = 3, which at least gives the first digit of pi.) The ancient Egyptians and Babylonians made their own estimates of pi’s value, and Archimedes famously used a clever geometric argument to place the value of pi between 22/7 and 223/71.

While both of those fractions come close to representing the actual value of pi, we’re always coming up with better ways to express pi’s value. Recent attempts tend to rely not on geometry but on mysterious formulas like the one often taught in first-year calculus:

And this is just one of many “infinite series” representations for pi.

The Indian mathematician Srinivasa Ramanujan — you may know him from the 1991 book and 2015 movie “The Man Who Knew Infinity” — owes his fame, in part, to his pursuit of elaborate formulas for the reciprocal of pi, or “one over pi” in the common parlance. Ramanujan’s formulas reveal mysterious connections between pi and patterns in prime numbers — whole numbers like 2, 3, 5, and 7 that are divisible only by themselves and one.

Fascinating as they are in their own right, formulas like Ramanujan’s provide the starting point for the “extreme computing” efforts to calculate pi we’ve all read about in recent years. In 2016, computer whiz Peter Trueb made headlines when he used an ingenious computational configuration to calculate pi to mind-blowing 22,459,157,718,361 decimal points.

Americans have a nature problem. Is ‘biophilic design’ the solution?

While some people use computers to calculate ever-more-accurate values for pi, others memorize pi to thousands of digits and then recite them aloud in a public setting — as if reciting a sonnet for robots. The current Guiness Book world record holder here is Rajveer Meena from India, who in 2015 recited 70,000 digits of pi before stopping.

So while we differ in the ways we think about pi and work with pi, we can all come together today to celebrate the seductive powers it has over our minds. So on this March 14, take a moment to contemplate this remarkable constant — maybe over a slice of pie. Here in Dartmouth’s math department, we’ll have a nice selection — and we’ll start at precisely at 1:59 and 26 seconds.

Get the Mach newsletter.