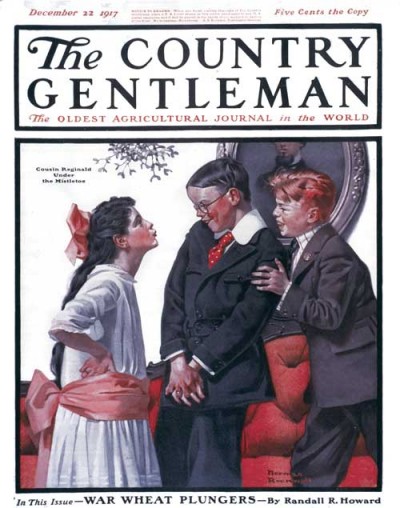 (A reblog from 3 years ago)

Why do we kiss each other under bunches of the devious, toxic Mistletoe every Christmas?  Well, its a complicated story. Many mythical stories surround the Mistletoe. Its magical lore includes how the Norse god Baldur — second son of Odin, god of truth and light — who was so beloved by the other gods that they sought to protect him from all the dangers of the world, but forgot to include the mystical Mistletoe.  Loki, a jealous Druid citizen who sought to test the powers of Baldur, made a dart from the Mistletoe and murdered Baldur.  However, Baldur came back to life and Frigg, Baldur’s mother, kissed the Mistletoe for saving her son’s life and from that time forward a Mistletoe was hung at the threshold of each home to ward off evil spirits and for good luck. Overtime, people started kissing each other at the entrance to a room for good luck and to be gracious to the host.

The lore of the Mistletoe is thousands of years old. It was sacred to the Celts and Druids of Northern Europe and other countries around the world where Mistletoe thrives and is believed to be a magical everlasting healer. The Mistletoe has been called a symbol of virility, could cure all manner of diseases, warded off death in battle, induced omens of good or bad fortune, and used as a divining rod pointed the way to riches of gold and silver. It is said to have given life everlasting to the Druid Gods and souls within the White Oaks tree. Mistletoe, a thief among plants, chooses the Oak tree above all others as it’s natural parasitic home.

The Mistletoe’s magical lore began with the awe of nomadic tribal peoples that surrounded this parasitic plant that grew without roots, as though it had fallen from the sky as a divine gift from the Gods. The Mistletoe was likened to the soul, a disembodied spirit that had great power. It was considered the great healer and protected against witchcraft, nightmares; it evoked ghosts and caused them to answer your questions.

Then there’s the flower’s semi-parasitic nature. Mistletoe, a poisonous relative of sandalwood, attaches itself onto trees to steal its host’s water and nutrients. Unlike sandalwood, however, mistletoe seeds are dispersed by berry-eating birds, which allows the plant to grow on branches high above the shade, freeloading on other trees’ sunlight. Mistletoe should never be placed where children can reach it and accidentally be poisoned by eating the berries.

All of that said, there is still something magical and exciting about standing underneath the Mistletoe waiting for a kiss to be bestowed.  🙂

13 thoughts on “Under the Mistletoe!”