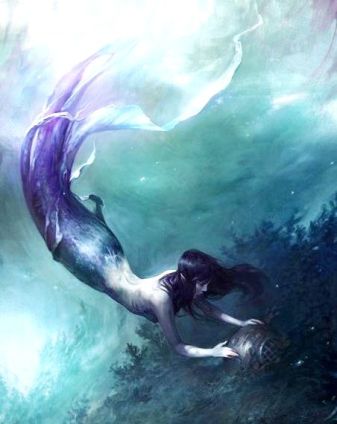 Sara Windsor was 12-years-old and living in Florida on the beautiful Gulf coast, when her mother and grandmother took her and her siblings to the “Jetties” at Indian Pass to swim. It was a popular place for locals but not well-known for tourists. The Jetties are breakers made of huge boulders that, like a pier, one can tie a boat up to.

It wasn’t the sunniest of days to go swimming, the August sky was covered with gray clouds and the sea was rolling with drab green humps like whales coming to shore, a telling sign that in the far distance there had been a big storm churning up the waters.

Sara was a natural mermaid. Anyone would think she had a tail, as she swam out farther than anyone else. Like a dolphin, Sara moved with grace and agility.  She could stay underwater for minutes at a time, never really wanting to come up for air. When Sara did surface from the drab green rolling waves, she noticed that no one was in the water.

Everyone had lined up, single file on the beach like statues, and her mother was on her knees. No one made a sound – there was dead silence. Sara sensed something was terribly wrong. She turned to look behind her as a huge rolling wave broke and she saw an immense gray white form break through the wave. Sara always stayed vertical in the water when not swimming or diving to the bottom, like any smart mermaid would do, and she had such buoyancy that she needed no movement to stay afloat.

Sara watched with awe, not fear, this amazing creature as it began a large slow circle around her and she silently watched as the shark encircled her. She understood innately, like any fish would know, the danger movement would bring. She allowed the waves to bring her to closer to shore, with the incoming tide. Sara watched the next circle of the great white shark as it drew closer and closer to her. Sara knew she had only one more circle before the Great White had her in its huge jaws. She was close enough to the shark to see its eyes were dark blue orbs that appeared not to see her.

Sara made the decision that it was now or never to learn to fly. She forced herself upward, out of the water like a flying fish and landed at the shore’s edge. The great white was nipping at her heels as she ran up the slope of sand to safety. The Great White, never one to give up easily, beached itself to get what it thought was a young tasty seal. Sara watched the immense shark wiggle back into deeper water, yet it still chased her scent along the shoreline turning back and forth.

Sara wonders to this day the gift of silence from the beach goers and that no one tried to help her, a blessing in disguise. If they had, they would have brought the great white closer to shore and blocked her escape. The ocean that day was also protecting her as it rolled in with the tide. If the tide had been going out, Sara would have had no chance to survive at all.  Sara believed her guardian angel was with her that day.

11 thoughts on “Sara and the Shark”